Dear Media, I’ve endured your clickbait headlines that mislead. I’ve sorted through your articles that are nothing more than ads. I’ve even suffered your racist code words that are subtle yet effective to perpetuate stereotypes. But what I cannot and will not overlook is your obvious glee to purport images of slain or injured black and brown bodies as if we’re no more than eviscerated roadkill. Please stop.

The prominent circulating today (June 26, 2019) in newspapers, on television and online of a photo of a Salvadoran father and his daughter lying face down in the Rio Grande is both tasteless and racist. Why racist? Well, the bias is obvious. When was the last time you did the same regarding white victims? There seems to be a care and a sensitivity given to people of Caucasian nature that is not afforded to black and brown people. Just stop.

When the unjust assassinations of us by police are caught on film, you loop those videos incessantly, only stopping for commercial breaks. When our moments of suffering are captured, those images are publicized to promote your political propaganda or an agenda that has little to do with advocacy. Just stop.

Exaggeration of news, scandal-mongering, sensationalism and bias presented as fact is nothing more than yellow journalism. The public deserves better than that. You’ve lost your way. Please stop and return to the professional and ethical standards that uphold real journalism. 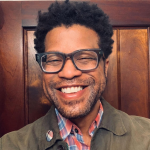